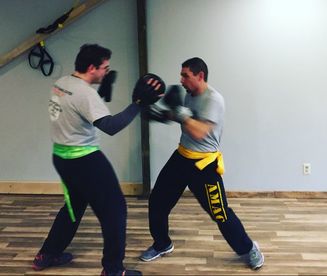 Legacy JKD is a highly effective self-defense training method that has adapted and grown to fit our cultural perceptions
and expectations. More than a list of techniques to replicate, LJKD provides students with a set of universal combat principles that govern the training, conditioning, and tactics of the practitioner.  Students become adaptive, fluid, and mobile under pressure.  Skills that have been refined and honed in class become a part of the nervous system, allowing practitioners to immediately respond to threats. LJKD exemplifies the adage "simple ideas applied masterfully" by utilizing a fundamental core curriculum that expands with the growth of the practitioner.
Sifu David is a proud affiliate of Sijo Alan Baker and the Atlanta Martial Arts Center's Legacy Jeet Kune Do program.  LJKD has been influenced by Sijo Alan Baker's (founder of Legacy JKD and AMAC Tatical) time not only training with some of the best trainers in the martial arts; but also the military, police, and executive protection specialists.  Due to these unique opportunities the LJKD training methods have been proven to be effective and reliable in some of the most stressful environments possible. 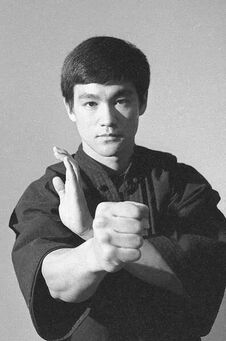 About Jeet Kune Do
Jeet Kune Do also “Jeet Kun Do”, “Jeet Kuen Do” or simply “JKD” is an eclectic/hybrid system and philosophy of life founded by martial artist Bruce Lee in 1967 with direct, non classical, and straightforward movements. Due to the way his style works, Jeet Kune Do practitioners believe in minimal movement with maximum effect and extreme speed.

The system works on the use of different ‘tools’ for different situations. These situations are broken down into ranges (Kicking, Punching, Trapping and Grappling), with techniques flowing smoothly between them.
Unlike more traditional martial arts, Jeet Kune Do is not fixed or patterned, and is a philosophy with guiding thoughts. It was named for the concept of interception, or attacking your opponent while he is about to attack.
Through his studies Lee came to believe that styles had become too rigid, and unrealistic. He believed that combat was spontaneous, and that a martial artist cannot predict it, only react to it, and that a good martial artist should “Be like water” and move fluidly without hesitation.
More Info